The famed shogun Tokugawa Ieyasu was the first person to ever witness a firework in Japan. Ever since then, the Mikawa area of Aichi Prefecture has been a thriving fireworks region. Today, many other regions across Japan—most notably Akita, Miyagi, Fukushima, Ibaraki, Niigata, Yamanashi, Nagano, Tokyo, Kanagawa, Shizuoka, Fukuoka, Oita, and Kagoshima—are backed by a long and rich history of firework-making traditions.
Meanwhile, the origins of Japanese artistic fireworks for the common people are said to date back to the Ryogoku Kawabiraki Fireworks of 1733. The year before, famine and disease had spread throughout the country, and many people died. Tokugawa Yoshimune decided to hold a festival as a memorial to the souls of the departed and to pray for the eradication of disease. It was dedicated to the water gods and scheduled for the first day of the boating season, known as kawabiraki no hi.
Eventually, a fireworks festival came to be held every year on kawabiraki no hi, a tradition that led to the modern-day Sumidagawa Fireworks Festival. The first fireworks expert to make a name for himself at the festival was Yahei Kagiya. Later, a fireworks expert called Ichibei Tamaya would branch off from the Kagiya family and make his mark in Edo. To this day, the Japanese call out “Tamaya!” and “Kagiya!” when they watch a fireworks show.

How firework shells are structured

Fireworks are made of tiny lumps of powder called hoshi (“stars”) that scatter light in all directions. The hoshi are lined up side-by-side along the inside of concentric bowls made of paper. These are called the tamagawa, or shell casings. Finally, a bursting charge called the wariyaku is placed inside the firework to break apart the hoshi, along with a fuse. Launching explosive (a lifting charge) is attached to the completed firework shell, which is then loaded into a launching tube. When the lifting charge is lit, it simultaneously lights the fuse, which shoots the shell into the air. When the fuse lights the wariyaku, the countless hoshi fly in all directions, causing a huge flower of fire to bloom in the night sky.

All firework shells launch at a different height, depending on their number. Ideally, they burst at the moment they reach their highest point. Fireworks that achieve this are said to be ”well-seated”.

Every firework shell also has a different exploded diameter, depending on its number. If a firework explodes to the maximum expected diameter for its number, it is said to have a good bon, or “tray”. If the hoshi that are packed in the shell scatter radially at an equal distance in 360 degrees to create a perfect circle, the firework is said to have a good kata, or “shoulder”.

When fireworks explode, the hoshi that are packed inside light up. Ideally, they all light up in the same instant and all go dark at the same time as well. Fireworks that achieve this are said to have a clean kiekuchi, or “disappearing point”.

Japanese fireworks experts have been carefully studying and refining these three characteristics of Japanese fireworks for generations, and continue striving even today to take their skills and techniques to the next level.

Characteristics of Japanese fireworks (Taken from Introduction to Fireworks by the Japan Pyrotechnics Association, FY2017 edition) 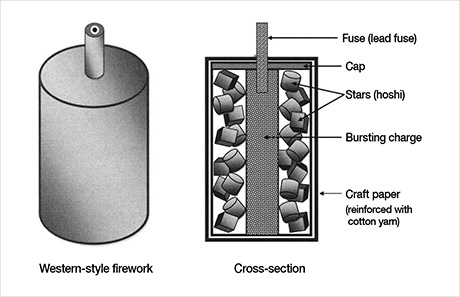 Japanese fireworks, particularly its well-known bursting cored chrysanthemum fireworks, are said to be the most exquisite and beautiful in the world. Their three main characteristics are listed below.

Japanese firework shells have a spherical shape, while Western fireworks are typically cylindrical. Japan also packs its shells with spherical stars, versus cylindrical Western stars. These Japanese hoshi feature layers of differently colored explosives, much like Japan’s old-fashioned kawaridama candy balls that have rings of color inside. 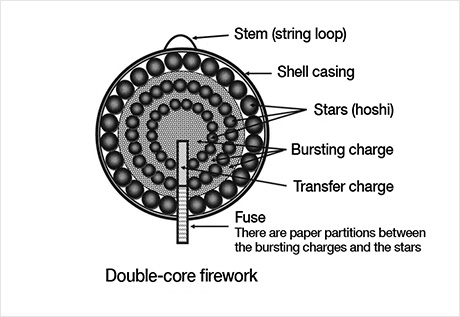 As the figure on the right shows, a Japanese firework packs hoshi spherically into the shell (container) with a bursting charge (the explosive that breaks apart the firework) in the center. The outside of the shell is made from multiple layers of durable paper that are pasted on and then dried. Striking the perfect balance between the force of the blast charge and the way the paper is glued is what allows the firework to burst into a perfect sphere with evenly-scattered hoshi. If the paper is not glued evenly, the firework will not explode symmetrically, resulting in a distorted flowering.

Cylindrical fireworks do not scatter stars in all directions, so they are not perfectly spherical when they burst. Western fireworks also have different coloration than Japanese fireworks, and are known for unusual patterns such as those that burst multiple times in the air. The smaller fireworks are equal in terms of their brilliance, but when they exceed a No. 5 (15 cm) shell, the Japanese fireworks achieve significantly more exquisite and beautiful expressions.

Japanese fireworks experts have also been able to perfect the techniques to create two or three concentric cores (cored fireworks) through their skillful use of Japanese paper. The ability to achieve an extraordinary level of harmonious beauty, where the firework appears perfectly spherical from all angles, with excellent color transformation and a clean disappearing point, is attributed to Japan’s unique aesthetic and superior craftsmanship. They represent the crystallization (and indeed, they can be as perfect as crystals) of the wisdom and tireless effort of generations of firework artisans. In recent years, Japan’s pyrotechnicians have been challenging themselves to create four-core, or even five-core fireworks, proving that there is no limit to their artistic curiosity and achievements. 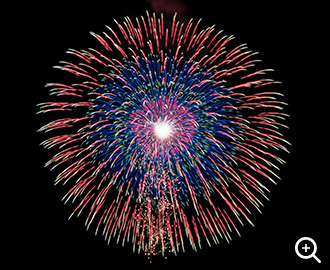 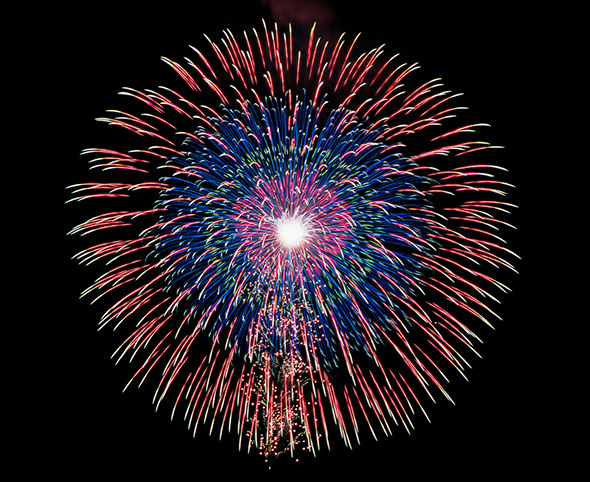 Elaborate techniques are used to make this ultimate artistic Japanese firework, which features four cores—each of a different color. The hoshi in each core transform, with the four layers resulting in multiple transformations in an instant. 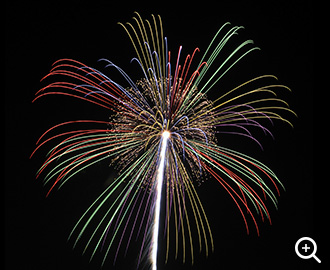 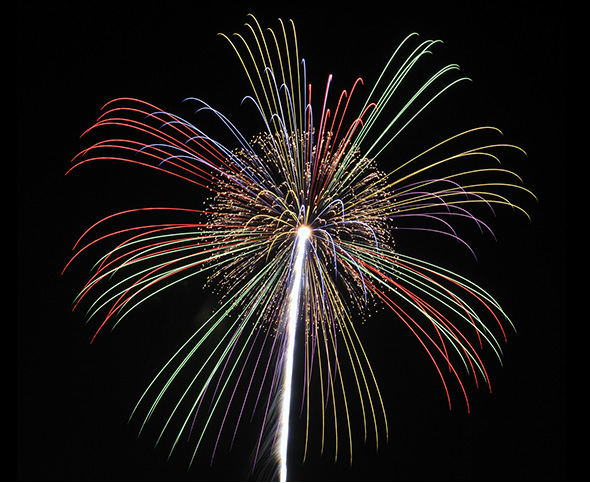 A silver trunk of light rises in the night sky as this firework is launched, bursting into bloom just as it reaches its highest point.
From its sparkling center shoot eight huge petals in eight colors, as beautiful as a kaleidoscope. 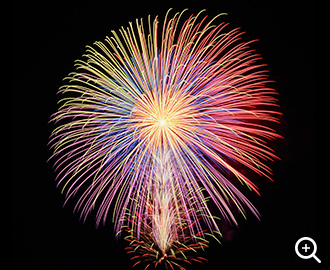 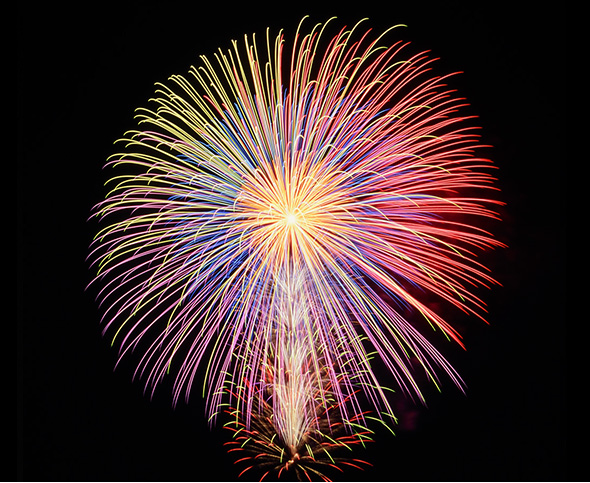 As this firework is launched, small flowers burst in rapid succession the higher it climbs. When it reaches its highest point, a brilliant five-colored burst explodes into the night sky like a dahlia. 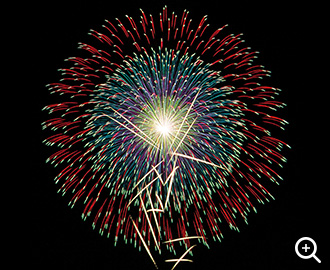 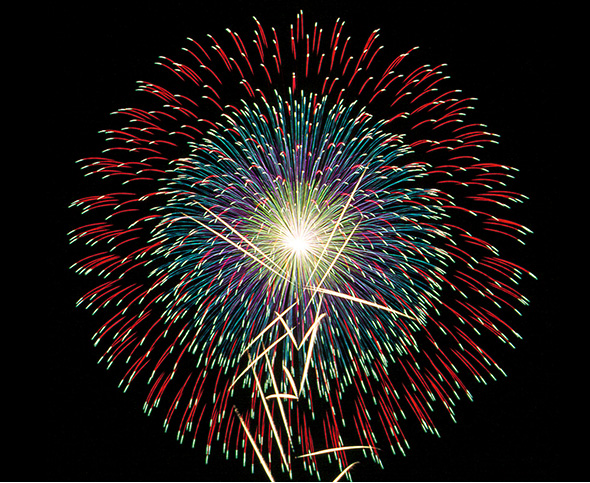 Each hoshi retains its perfect symmetry as the large central bloom explodes into the night sky, creating a glorious artistic shape when viewed from any possible direction. Numerous colors transform, all in perfect order and all at the instant the bloom unfolds, before gracefully fading into the darkness. The exquisite, fleeting beauty of this firework is the quintessence of Japanese firework mastery. 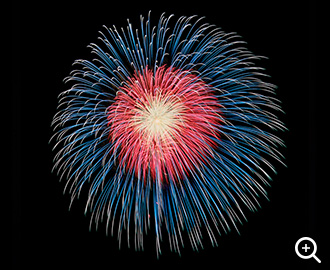 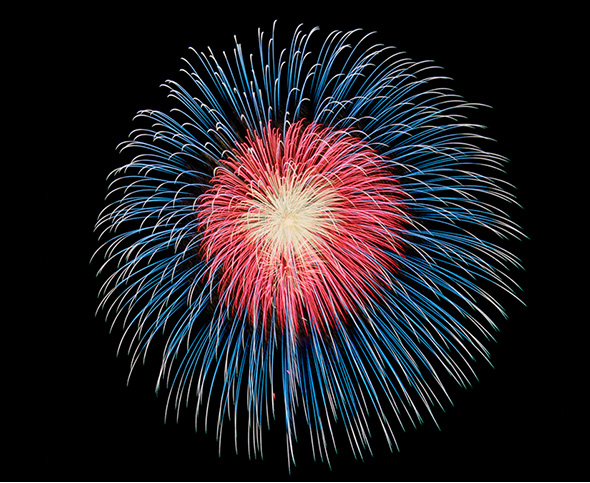 This multilayered firework comes with two, three, four, or even five rings arranged inside its shell. The hoshi in each layer transform into two or three colors, resulting in a gorgeous bloom that produces between six and twelve colors in a brief two seconds before fading forever into the night sky. Japanese artistic fireworks--the envy of the world—don’t get much better than this.